The cost to replace a synthetic turf field ranges somewhere between $360,000 to $620,000. The exact price depends on various factors that we will break down in this article. We will also describe what the replacement process looks like and what important considerations there are for sports facility operators when undertaking such a project.

You can also use our synthetic turf field replacement cost calculator to get a customized cost estimate for your resurfacing project.

What influences the cost of synthetic turf replacement?

From removing the worn-out turf field to recycling the materials and putting in a new playing surface there are various factors that affect the overall cost of replacing an artificial turf field surface. Here’s a handy breakdown of those factors:

How to know when to replace the turf field?

The lifespan of an artificial turf pitch is usually 8 – 10 years. The potential to reuse components of the old field varies depending on the use (the sport played, frequency of play, weather conditions, etc), product quality, and maintenance of the turf over its life. In some cases, the pitch is barely playable after only 6 years and the turf system needs to be replaced. With professional care the appropriate equipment and high product quality, an artificial turf pitch can be used for training and games for up to 10 – 12 years.

Artificial turf fields are robust and can take a beating for quite some time, but nothing lasts forever. After years of heavy use, you will begin to see certain signs on and around the field that suggest you should consider replacing the turf field playing surface.

Here are some of the “red flags” to look out for:

To the untrained eye, it can be hard to evaluate when the turf field needs replacement. Professional synthetic sports turf companies can visit your sports facility and perform an audit. On top of the visual inspection of the field, they can perform a GMAX test, which measures the ability of the playing surface to absorb shocks due to impact. You can read more about turf field testing in our separate article. 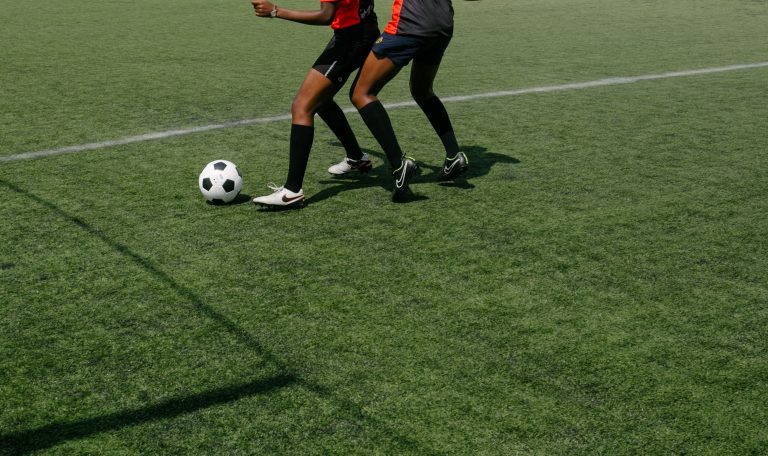 Removing the old system and installing the new one should be smoothly coordinated. Deconstruction should be completed as soon as possible so the installation of the new turf can be started with minimal delay, therefore minimizing the amount of time your field is out of service.

The deconstruction normally takes between two to four working days. After that, the crew begins rehabilitating the elastic base layer and lays the artificial turf tracks.

Some manufacturers offer new forms of artificial turf field recycling. Here, the old artificial turf is not thrown out, but is re-installed on a secondary or training field.

Special machines are used to dismantle the old artificial turf, separate the infill granules and sand, and disinfect the individual components. The artificial turf strips are rolled up with or without infill granulate and laid again at the new location.

This form of recycling is ideal, for example, for clubs that want to equip a training or recreational field with an artificial turf surface that does not have to meet the requirements of regular training and competition.

According to the manufacturer, it is possible to remove the old artificial turf and install it on a new pitch within one week.

What to do with the elastic base layer?

The costs for artificial turf field recycling depend on the size of the field and on which components (elastic base layer, infill granulate, etc.) can be reused, and which have to be disposed of properly. The costs for labor, removal and disposing of the old artificial infill surface are more or less between $60,000 – $100,000 for a 72,000 sf sports field.

There are additional costs for breaking down the artificial turf and separating the infill granulate and sand. If the elastic base layer cannot be reused, it will impart more costs for removal and disposal.

With an eye to conserving resources, facility owners and sports construction companies should make every effort to reuse a large proportion of the artificial turf system to the economic cycle. What remains after that will be disposed of or incinerated.

There are many factors to consider when replacing your synthetic turf field playing surface. Here are some secondary considerations that you should take into account and discuss them with potential turf field replacement companies:

Consider signing up for a professional turf field maintenance program

Without regular care and maintenance, damage to the pitch will be its undoing sooner than the club and, above all, the  players would like. As is often the case, the more often the field  is used, the more you should invest in maintenance and ongoing upkeep of the turf system.

Get a cost estimate for replacing your turf field

By now you should have a pretty good idea of all the moving parts that a turf field replacement project entails. It is definitely not something you want to consider doing yourself since it is quite labor intensive and requires special knowhow and equipment.

You can always contact the supplier that installed your artificial turf field in the first place, but you might also want to “seize the moment” and compare prices between different suppliers. Often times you can find a supplier who is able to give you a better deal for whatever reason. Maybe they want to get rid of their stock or possible a supplier is willing to charge less for a logistics. Who knows! The point is that you will not know until you ask.

We make this process very quick and easy for you. Our turf field replacement cost calculator give s you an accurate cost estimate for the overall costs of the project. If you wish you can also choose to get contacted by some of the leading turf field installers in the US for further information and pricing.